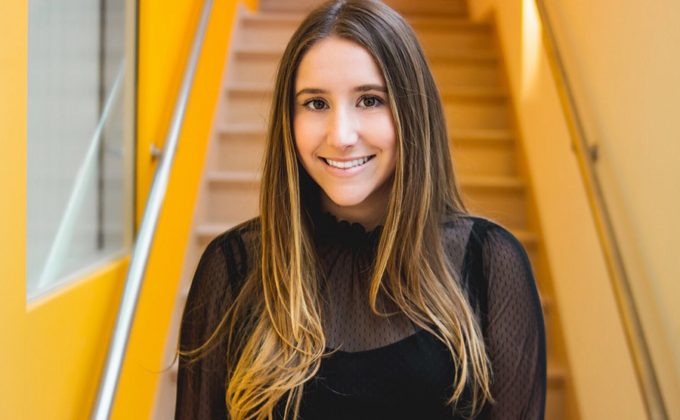 As senior Gabrielle Finear was pursuing a major in computer science, economics, and data science, she wanted to find a way to apply what she was learning. “I found my major to be incredibly theoretical. Although my coursework provided me with an excellent educational foundation, I didn’t want to graduate without ever having built anything,“ Finear explains. In the spring of her sophomore year, Finear and a friend applied to the MIT Sandbox Innovation Fund Program as team Snack Hack with the idea of building a better food delivery service on campus.

Each semester, MIT Sandbox supports over 350 student-led teams with seed funding, mentorship, and entrepreneurial education. The goal of the program is to enable any MIT student — inspired to solve a problem with an innovative solution — to learn and experience entrepreneurship. As an early-stage Sandbox team, Finear’s team participated in group mentoring where they were introduced to foundational entrepreneurship and business concepts. They tapped into $1,000 in seed funding to conduct initial market research and design a minimal viable product. By the end of the summer, they had determined the market was oversaturated, and Finear realized that “the world just does not want another food delivery service.”

But this was not the end of Finear’s entrepreneurial journey at MIT. In fact, it was just the beginning. One of the core tenets of MIT Sandbox is to create a supportive environment where students can explore an idea, take risks, and pivot based on what they learn. “Sandbox encouraged me to get my hands dirty and elevated what would have otherwise been just a technical side project. They caught me when I failed in my original idea and then encouraged me to build yet again,” Finear says. “I decided to take a step back and think critically about problems I intimately knew and could creatively fix.”

Six months later, in spring 2020, Finear reapplied to MIT Sandbox with a new co-founder, Vanessa Wong ’20, as Team Boon. Their idea: a new gig-economy platform that provides users with an efficient way to crowdsource favors from their social circles. The inspiration came from Finear’s personal experience of spilling coffee on her one and only suit 30 minutes before leaving for the train station and a major interview in New York. Finear recalls, “I reached out to every community I could possibly think of that would let me borrow a new outfit — I sent an email to my sorority, a Slack message to my business club, and a group chat to my best friends.” She ultimately found a suit and decided there should be a better way to quickly connect to all her networks when she needed an urgent favor.

To determine if a gig-economy market existed on campuses, Team Boon interviewed over 5,000 students and started Instagram accounts on campuses up and down the East Coast. Their pitch to the MIT Sandbox Funding Board highlighted the promising results of their research. Over the next year, they leveraged the non-dilutive funding awarded by the funding board and personalized guidance from two Sandbox mentors to plan and build their app. They also took advantage of the entrepreneurial ecosystem at MIT, particularly the workspace and startup-focused workshops offered by the Martin Trust Center for MIT Entrepreneurship. The team grew to include two additional MIT undergraduates, sophomore Alexandra So and junior Kevin Pho, and this spring Finear’s idea became a reality with a family-and-friends beta that will expand to a campus-wide beta at MIT in the summer.

The experience of working on a startup has been eye-opening to Finear in other ways. “I am often shocked by the sexism that continues to permeate the broader entrepreneurial space. For example, we had a potential investor say to us, ‘It’s nice that you’re girls with lots of friends who ask for help, but other people won’t use this.’”

Despite moments like these, she describes the journey as incredibly empowering. “We’ve been fortunate to find communities of fellow female entrepreneurs, like Dorm Room Fund’s Female Founder Track, to build alongside. Furthermore, our mentors at Sandbox, specifically Seth Muriph ’82, SM ’84 and Jinane Abounadi, MIT Sandbox executive director, give us relentless support and push for our continued recognition.”

With graduation approaching, Finear shares, “I am most excited for real people to start using Boon! Our initial launch success will determine our team’s post graduation plans.”

In reflecting on her experience as a student entrepreneur at MIT, Finear explains that one of the reasons she chose to attend MIT was “because of the unparalleled entrepreneurial resources made available to undergraduates. I do not think there is another institution in the world that could replicate the mentorship, network, equity-free funding, talent pool, and support I have had access to over the last four years. I think I would have been crazy to not try and start a company.”