National Academies of Sciences, Engineering, & Medecine: Breaking Down Barriers to Entrepreneurship for Women

The number of women among new inventors is edging upward, yet still makes up only about 13% overall. What keeps more women from engaging in invention & entrepreneurship? 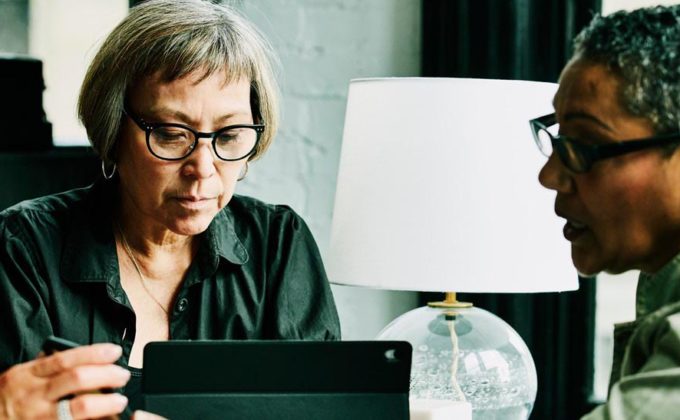 By Sara Frueh
Katherine Jin was a junior majoring in biology and computer science at Columbia University in 2014 when the Ebola crisis in West Africa reached its worst point, and she wondered how she could contribute. “I knew that I wanted to help in some way, but I didn’t really know how I, as a student, could make any kind of impact.”

Then the university held the Columbia Ebola Design Challenge, which brought in health care workers from Africa to talk about the problems they were facing and challenged students to find solutions. One problem the health care workers pointed to was ineffective decontamination.

Working with two other students, Jin developed a way to colorize disinfectants so that health care workers can see what surfaces are and aren’t covered when cleaning; the color then fades to indicate when decontamination is complete. They tested the additive — known as Highlight — in Liberia and in Guinea during the Ebola crisis, and it’s now being used by NGOs around the world, said Jin. To commercialize and expand applications of their invention, the students founded Kinnos — a company that currently has 15 employees and has had two rounds of venture funding, and for which Jin serves as chief technology officer.

“Growing up I always had liked STEM, but I had been warned away from STEM by what I now realize [are] sexist notions of understanding what women can and can’t do,” said Jin. When she tried to sign up for an eighth grade computer science class, for example, a teacher told her that the class was only for boys.

So Jin didn’t expect to wind up as an inventor and entrepreneur. “I really like it and enjoy it. But I also feel like part of my journey was a lot of reckoning with and understanding how women are often talked out of [being in] this space.”

Although the number of women among new inventors is edging upward, women still make up only 12.8 percent of inventors in the economy overall, according to the U.S. Patent and Trademark Office. Women entrepreneurs also aren’t getting the venture capital needed to build fast-growth companies, said Gilda Barabino, president of Olin College of Engineering. “Recent studies show that women received only 2.7 percent of all venture funding in 2019, and this number is even more dismal for Latinx women — who received 0.37 percent — and Black women, who received only 0.27 percent.”

Jin and Barabino were among the speakers at a June workshop hosted by the National Academies that explored the obstacles women face in pursuing careers as inventors and entrepreneurs, along with possible ways to overcome them.

In addition to the social justice reasons for eliminating barriers that keep women from pursuing invention and entrepreneurship, there’s also an economic imperative, said Fiona Murray, co-director of the MIT Innovation Initiative. “We know it’s extremely inefficient to use only part of our talent pool.”

Research shows that diverse teams incorporate more sources of information and have better outcomes — “higher collective intelligence,” said Murray. She also pointed to data from MassChallenge — a startup accelerator on whose board she serves — that revealed that startups founded by women delivered more than twice the revenue per dollar invested than startups founded by men.

“There are real consequences to not having an inclusive innovation and entrepreneurship ecosystem,” said Barabino. For example, medical devices developed for monitoring COVID-19 were found to be inaccurate when monitoring people with darker skin, she noted. And the gender gap may be contributing to missing female-focused inventions, according to a study recently published in Science in which an examination of biomedical patents from 1976-2010 revealed that patents with all-female inventor teams are 35 percent more likely to focus on women’s health.

Bias and other barriers

One problem that makes it hard to engage girls and young women in invention and entrepreneurship is a lack of female role models, multiple speakers pointed out. Because the names of famous male entrepreneurs tend to be front-of-mind for most people, we need to consciously highlight women faculty and innovators, said Murray. “Women in STEM continue to ‘see’ very few diverse innovators and entrepreneurs — and that happens unless we are very consciously inclusive.”

Another challenge for women in academia, particularly for women of color, is being tasked with extra service work and mentoring, said Barabino. “It might limit them from actually pursuing opportunities in innovation and entrepreneurship.”

Sanna Gaspard, founder and CEO of Rubitection, said that women and minorities are often perceived as too risky for investment. She has given the same pitch in two different scenarios — one in a competition with investors serving as judges, and the other to an actual investment group. “I will win the competition, and the investors will say ‘no thank you, you’re too early.’” The difference is that in a competition, the investors are forced to fill out an objective sheet explaining their rating, whereas actual investment decisions are more subjective, said Gaspard. “The fact that there’s a difference in the outcome, for me quantifies that racism and sexism, because it’s the same pitch.”

Even the questions asked by venture capitalists (VCs) when considering pitches from entrepreneurs reveal an unintended gender bias, said Murray. One study found that in pitch competitions, VCs were more likely to ask men “promotion” questions: How big could this business possibly be? What are the major milestones that you target this year? Women, on the other hand, were more likely to be asked “prevention” questions: Is this a defensible business? What are the things that could go wrong?

Speakers and breakout sessions brainstormed what can be done to break down these barriers and engage more women in invention and entrepreneurship — for example, increasing early education about these fields coupled with immersive experiences that let kids develop confidence and competence in inventing.

“This education needs to be in public schools, said Carol Dahl, executive director of the Lemelson Foundation. “If we don’t embed this in public education, we won’t reach all the kids …. Also, the approach matters — it needs to be inclusive, and kids need to work on things they care about; kids need to define the problems they care about. It makes STEM important to them and relevant to their lives.”

Multiple speakers pointed out that more intentional supports and networks are needed for women who pursue careers. Arlyne Simon, founder and CEO of Abby Invents, suggested the creation of an organization to enable women and minority tech entrepreneurs to support one another, sharing advice and lessons learned. Government agencies could do more outreach tailored to women and people of color, and university tech transfer offices could play a bigger role in facilitating new inventors’ understanding of how to move innovations forward — both ideas offered by participants in a breakout session.

Access to early-stage funding is also important, said Gaspard. Rather than trying to change investors’ biases about the riskiness of investing in women and minorities, the focus should be on changing investing behavior. “What we really need to do is start putting programs in place that hold people accountable and have incentives for people to invest in women and minorities.”

One step would be for the government to partner with large venture capital firms to establish dedicated funds for women and minorities, Gaspard said. Another would be to create incentives such as tax credits for investors who choose to fund startups run by women and minorities.

“I want to encourage you to jump into entrepreneurship, because the world needs you. It needs your ideas.” — Frances Arnold, winner of the 2018 Nobel Prize in Chemistry

Inventor Frances Arnold — winner of the 2018 Nobel Prize in Chemistry for her work harnessing evolution to develop new enzymes — offered words of encouragement directly to women considering these career paths. “I want to encourage you to jump into entrepreneurship, because the world needs you. It needs your ideas. If we’re going to solve all of the problems we face, we need a lot of people to do it. How do we provide a better life to 8 billion people? We can’t do it without you.”