Popular Science: The Army’s Infantry Squad Vehicle seats 9 and can be dropped from a cargo plane

"This is the kind of innovation which will allow us to quickly field the equipment our warfighters need." 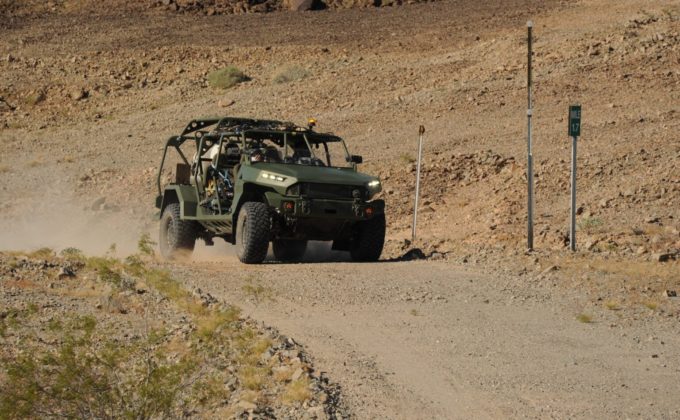 The Infantry Squad Vehicle at the US Army Yuma Proving Ground in February, 2021. Mark Schauer / US Army

Before the Army can win a battle, it has to move people into position. More specifically, it has to move squads of soldiers—close to the smallest functional unit of war—and make sure they are in a position to fight effectively.

To accomplish this, and make sure that soldiers can fight and move over the harshest terrain, the Army is turning to a lightweight nine-person transport known as the “Infantry Squad Vehicle,” which looks like a big jeep that can carry rucksacks on the top rack.

On November 8, 2021, Deputy Secretary of Defense Kathleen Hicks shared a brief video clip of her driving the ISV on twitter. 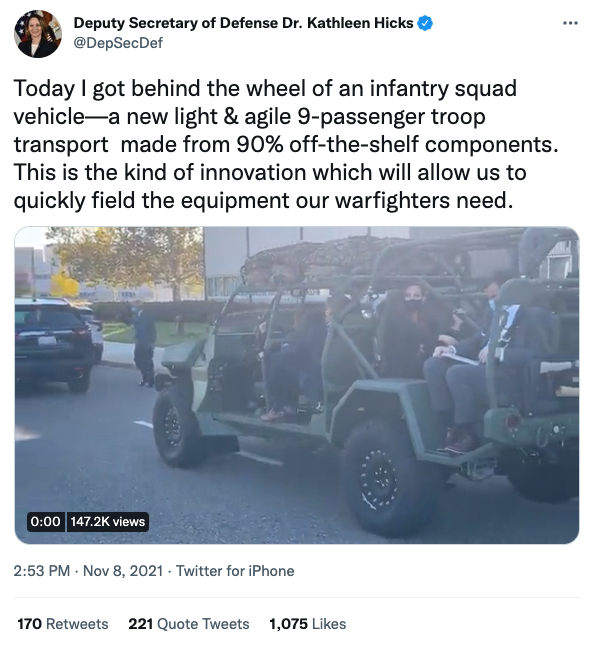 The vehicle seats nine: two in the front, three in the second row, two people facing backwards behind the third row, and one person each facing outwards from the sides on the rear. The sides and seats are all open. Passengers can buckle into place, but there are no doors. This makes it a vehicle that soldiers can easily enter and exit, reducing to a bare minimum the amount of time spent fiddling with doors before driving away or dismounting into position.

The lack of armor is immediately apparent. MRAPS, the giant explosive-resistant troop transports that the Pentagon ordered a few years into the Iraq and Afghanistan wars, were produced in such a quantity that surplus models are regularly in use with police departments across the United States. Those slow, lumbering vehicles are the face of a type of modern warfare, but they are a specific adaptation to a specific set of circumstances.

MRAPs, as well as heavier armored transport vehicles like Strykers, are useful for fighting in areas where soldiers expect ambushes and roadside bombs. That kind of fighting is more common in counter-insurgency warfare, with soldiers patrolling villages and cities and countryside looking for small armed groups.

On the other hand, the Infantry Squad Vehicle, with its open sides, light body, and giant tires, is about moving soldiers into place, but that’s where the similarity to heavier vehicles ends. There’s no armor or gun turret in the base version because those would prevent its primary function, which is carrying soldiers over difficult terrain quickly. (At a defense exposition in October, General Motors, which makes the ISV, showed off a model that includes a gun turret and vehicle mounts for infantry weapons. To include those weapons, the armed model gives up four seats for passengers, and is not yet a part of planned Army acquisitions.)

The Army is invested in the ISV to the tune of 649 vehicles by the end of 2024, with plans for 2,065 total. It’s so integral to how the Army plans for fighting future war that it’s already writing its doctrine with ISVs in mind. In an Army Field Manual published January 2021, the role of an Infantry Brigade Combat Team is defined as “dismounted operations in complex terrain—a geographical area consisting of an urban center larger than a village and/or of two or more types of restrictive terrain or environmental conditions occupying the same space.”

That restrictive terrain could be a small town next to a marsh. It could be an industrial complex on the edge of a rock field. It could also be a network of trenches dug into a forest, or a myriad of similar complex spaces. This is the kind of area that is accessible by foot and by off-road vehicle, but difficult or impassable for heavier armored vehicles, like MRAPs or Strykers. The ISV, by carrying a squad and its gear to the action, lets the soldiers protect themselves with speed and then by dismounting from the vehicle into cover. The car is how soldiers get to the fight; it is not the platform from which they will fight.

Another requirement for the Infantry Brigades that will use ISVs is the ability to arrive quickly by air, and be ready to move as soon as they hit the ground. The vehicle requirements specify that it can be carried in a sling underneath a Black Hawk helicopter, or a Chinook Helicopter, and it can be dropped at low speeds from a flying C-130 or C-17 transport plane.

Once soldiers have arrived, by parachute or landing, the whole of a formation can travel into position with the squad vehicles, driving from the safety of a landing zone to where they’re needed in action. Each ISV will carry, between passengers and gear, 3,200 lbs.

The Army tested the ISV at Yuma Proving Ground in Arizona in March 2021. “This vehicle is going to help Soldiers in the Infantry Brigade Combat Teams that currently walk everywhere,” Steve Herrick, product lead for Ground Mobility Vehicles with the Army, said in a release. “It’s made to be ‘a better boot,’ a capability that allows you to effectively change how you operate.”

Keeping with that lightweight transport functionality, Herrick says the ISV is 70-percent built from parts identical to a Chevy Colorado ZR2, a commercial crew-cab pickup. Of the remaining parts of the vehicle, 20 percent come from commercial after-market mods for a Chevy Colorado. The remainder is military specific.

That gives the ISV the bones and body of an SUV. With its mission to extract soldiers from rough terrain, and get them quickly to safety, we might even call it a “Squad Utility Vehicle.”