The MIT Innovation Initiative engages thought and action leaders to work directly with MIT scholars to better understand the complex processes involved in taking innovation beyond invention to address urgent global problems. Visiting Innovation Fellows are drawn from policy, corporate, risk capital, and entrepreneurial settings, and interacts with the MIT community through convening events, lectures, and one-on-one sessions with student entrepreneurs and others seeking to engage more deeply with innovation practitioners. 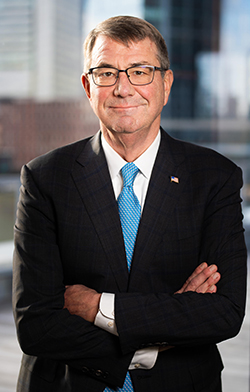 Carter served as the 25th United States Secretary of Defense from 2015 to 2017, after serving as the number two (“COO”) and number three (“weapons czar”) positions in the Pentagon. For over 35 years inside government under presidents of both political parties as well as in the private sector, Carter leveraged his extraordinary experience in national security, technology, and innovation to defend the United States and make a better world.He was awarded the Defense Distinguished Service Medal, the Department’s highest civilian honor, on five separate occasions.

Leading the largest organization in the world with more than three million civilian and military employees and an annual budget of more than half a trillion dollars, Carter became known for his savvy leadership and for ensuring the Pentagon thought “outside its five-sided box.” At a time of global change and congressional gridlock, Carter transformed the way the Defense Department fought adversaries, stood with allies and partners, planned and budgeted, partnered with private enterprises, and managed its talent.

As Secretary, Carter led the creation of the military plan and international coalition to destroy ISIS, capturing Mosul and Raqqa, and eliminating the group’s leaders and plotters while simultaneously conducting operations in Iraq, Syria, Afghanistan, Libya, and beyond. Carter also designed and executed the strategic pivot to the Asia-Pacific, established a new playbook for confronting Russia’s aggression, and launched a defense cyber strategy.

Along with directing America’s global operations, Carter spearheaded revolutionary improvements to the Department of Defense. To develop new technological and operational capabilities, he pushed investments in research and development to nearly $72 billion dollars in the fiscal year 2017 budget alone. To make the Department more innovative, Carter created the Defense Digital Service to bring tech experts into the Pentagon for a tour of duty. He opened Pentagon outposts in Silicon Valley, Boston, Austin, and other tech hubs to reconnect the government and military with private sector leaders and companies. He also created a Chief Innovation Officer position and established the Department’s first Defense Innovation Board – which attracted thought leaders such as Google Alphabet’s Eric Schmidt, Amazon’s Jeff Bezos, LinkedIn’s Reid Hoffman, Code for America’s Jennifer Pahlka, and many more.

He also launched six transformative ‘Force of the Future’ initiatives to change the way the department recruits, trains, and retains quality people. Most notably, he directed that all military positions be opened to women without exception. Before becoming Secretary of Defense, Carter served in the Department’s number two and number three jobs. As Deputy Secretary and Chief Operating Officer from 2011 to 2013, he oversaw the department’s management and personnel, and steered strategy and budget through the turmoil of sequester. As Under Secretary of Defense for Acquisition, Technology and Logistics (ATL) from 2009 to 2011, Carter managed global logistics for the largest enterprise on earth, and led the Department’s procurement reform and innovation agenda. This included the successful completion of key procurements like the KC-46 tanker as well as the cancellation of unsuccessful programs like the presidential helicopter. His leadership also resulted in rapid acquisitions of thousands of mine-resistant ambush protected “MRAP” vehicles, which saved countless service members’ lives in Afghanistan and elsewhere.

Earlier in his government career, Carter served as Assistant Secretary of Defense for International Security Policy from 1993 to 1996. He was responsible for the Nunn-Lugar program that removed and eliminated nuclear weapons in Russia, Ukraine, Kazakhstan, and Belarus, the military planning during the 1994 crisis over North Korea’s nuclear weapons program, and the U.S. nuclear arsenal. In the Defense Department and on Capitol Hill during the Cold War, Carter was known for his work on missile defense and the then-Strategic Defense Initiative, as well as basing options for the MX Missile. Over the past three decades, Carter has also served on the Defense Policy Board, the Defense Science Board, and the Secretary of State’s International Security Advisory Board.

In addition to his government service, Carter has taught at many of the world’s outstanding academic institutions. He has been a distinguished visiting fellow at Stanford University’s Hoover Institution and a lecturer at Stanford’s Freeman Spogli Institute for International Studies. At Harvard’s Kennedy School from 1996 to 2009, Carter was a Professor of Science and International Affairs and Chair of the International & Global Affairs faculty and co-directed the Harvard-Stanford Preventive Defense Project. He served as a physics instructor at Oxford University, a postdoctoral fellow at Rockefeller University and M.I.T., and an experimental research associate at Brookhaven and Fermilab National Laboratories. Carter is also author or co-author of 11 books and more than 100 articles on physics, technology, national security, and management.

Outside of government and the university, Carter was a Senior Executive at the Markle Foundation’s America-wide initiative to shape technology and trade strategies to enable all Americans to flourish in a networked global economy. Previously Carter was a Senior Partner of Global Technology Partners focused on advising major investment firms in technology, and an advisor on global affairs to Goldman Sachs. Carter has also served on the boards of the MITRE Corporation, Mitretek Systems, and Lincoln Laboratories at the Massachusetts Institute of Technology (M.I.T.) and as a member of the Draper Laboratory Corporation. He was also elected a Fellow of the American Academy of Arts and Sciences and is a board member of the Council on Foreign Relations and a member of the Aspen Strategy Group. Currently, Secretary Carter is a member of The MIT Corporation and Delta Airline’s Board of Directors. He also advises the MITRE Corporation and Lincoln Laboratories on technology matters.

A native of Philadelphia, he is married to Stephanie Carter and has two grown children.

Please direct any inquiries for Secretary Carter to Andrew Di Iorio at andrew_diiorio@hks.harvard.edu 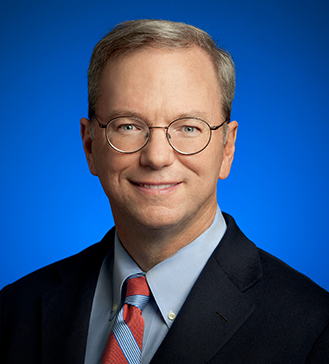 Eric Schmidt is Technical Advisor to Alphabet Inc., holding company of Google Inc, where he advises its leaders on technology, business and policy issues.

From 2001-2011, Eric served as Google’s Chief Executive Officer, overseeing the company’s technical and business strategy alongside founders Sergey Brin and Larry Page. Under his leadership, Google dramatically scaled its infrastructure and diversified its product offerings while maintaining a strong culture of innovation, growing from a Silicon Valley startup to a global leader in technology.

Prior to joining Google, Eric was the chairman and CEO of Novell and chief technology officer at Sun Microsystems, Inc. Previously, he served on the research staff at Xerox Palo Alto Research Center (PARC), Bell Laboratories and Zilog. He holds a bachelor’s degree in electrical engineering from Princeton University as well as a master’s degree and Ph.D. in computer science from the University of California, Berkeley.

Eric was elected to the National Academy of Engineering in 2006 and inducted into the American Academy of Arts and Sciences as a fellow in 2007. Since 2008, he has been a trustee of the Institute for Advanced Study in Princeton, New Jersey. Since 2012, Eric has been on the board of the Broad Institute and the Mayo Clinic. Eric was a member of the President’s Council of Advisors on Science 2009-2017. In 2013, Eric and Jared Cohen co-authored The New York Times bestselling book, The New Digital Age: Transforming Nations, Businesses, and Our Lives. In September 2014, Eric published his second New York Times bestseller, How Google Works, which he and Jonathan Rosenberg co-authored with Alan Eagle. In April 2019, Eric published his third New York Times bestseller, Trillion Dollar Coach: The Leadership Playbook of Silicon Valley’s Bill Campbell, which he co-authored with Jonathan Rosenberg and Alan Eagle.

Eric became the Chairman of the Department of Defense’s Innovation Board in 2016 and was awarded the Department of Defense Medal for Distinguished Public Service in January of 2017 by Secretary of Defense Ashton Carter. He is Chairman of the US National Security Commission for Artificial Intelligence.  He is a member of NASA’s National Space Council User Advisory Group which is chaired by the Vice President. Eric is an MIT Visiting Innovation Fellow, member of the Advisory Board for MIT IQ, member of the MIT Commission on the Work of the Future, member of the MIT CEO Advisory Board, and member of the MIT Schwarzman College of Computing Advisory Council.  Eric is founder of Schmidt Futures which helps exceptional people do more for others by applying science and technology thoughtfully and working together across fields.