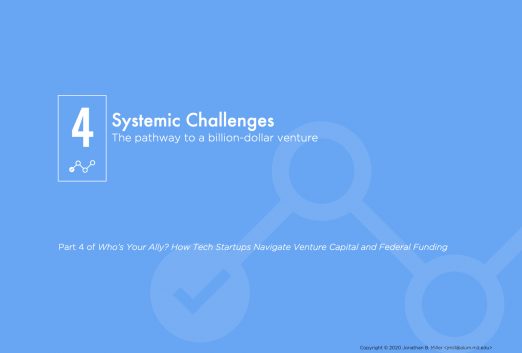 Who’s Your Ally? Part 4: Systemic Challenges – The pathway to a billion-dollar venture

There are systemic challenges for startups in dual-use (predominantly defense) opportunities to grow to the so-called “unicorn” billion-dollar-valuation startup status popularized in the media.

A billion-dollar startup, which typically provides an estimated 100x return on investment for early investors, is what a VC fund needs to pay the bills for all the losses incurred on the rest of a given fund’s investment portfolio.

There has been an uptick in billion-dollar DuVs despite extensive lobbying from major defense contractors (referred to colloquially and through the rest of this writing as “the primes”). Lobbying is an effective means to have requests for proposals (RFPs) written in such a way that limits the volume of proposals, since often A) the RFPs seek proposals that are so complex to satisfy that only primes have the expertise and human capital resources to apply, and B) only a figurative handful of companies qualify for bidding. For an opinion piece on lobbying-as-an-industry, read Palantir and 8VC founder Joe Lonsdale’s “Capture the Flag”. A holy grail of successful lobbying is to have an RFP come out with a sole source covenant. In other words, to have a request for bids on a project that, awesomely enough, only you, the young Padawan venture builder, qualify for. Lobbyists also seek influence on members of Congress, as they have the power to edit and approve DoD program office budgets by major acquisition, via the Major Defense Acquisition Program. Congress also approves budgeting for DoD “innovation” offices like Manufacturing.gov.

As a side note on terminology, “acquisition” to a startup team is often favorable and means being bought by a larger company to trigger a liquidation event and, hopefully, a hefty payday reward to compensate for the startup’s team’s taking on of risk to build the venture. “Acquisition” in government vernacular is more akin to how a human acquires bread from a bakery or definitions from a dictionary, as in, the processes by which new capabilities, tools, etc., are attained.

There are three venture-capital funded startups to have become unicorns.

Since the Cold War ended, there have been only three multi-billion-dollar venture-capital-funded startups predominantly serving government clients:

(Anduril is technically not yet worth multiple billions of dollars, but its valuation crested one billion dollars as of September 2019 and perhaps soon it will be worth multi-billions.)

To make a dual-use startup that is especially interesting to traditional VCs, the startup has two boxes to check:

The first point, having a Big Idea, is fairly intuitive, though tends to be difficult to formulate in practice. The second point, having a billionaire co-founder, may be opaque to the readers as to why it has historically been a causal – rather than correlative – factor in the growth of the aforementioned unicorn dual-use ventures. Startups with billionaire co-founders have at least one key advantage over those without billionaire teammates: generously-funded, mostly-founder-owned companies have the financial runway and autonomy to spend money for years without needing to show evidence of technological, commercial, and governmental traction to external investors.

In the early days, such startups can afford to put two lobbyists on the payroll, to start doing their magic in Washington, D.C. for the next n years. This may be to the tune of approximately $24,000 per month per lobbyist, according to investors in two of the three companies listed above with whom I interviewed, and this amount is commensurate with quotes for lobbying support I received when pursuing contracts on behalf of one of my companies. Are these lobbyists necessary? In general, yes, absolutely, because their efforts can pay back handsomely by doing the political hustle needed to get those slow – yet mighty – Washington wheels turning in the startup’s favor. For startups without access to or are unwilling to pay the total sum in cash, there may be some lobbying candidates who may negotiate alternative forms of payment or value exchange, though put in the effort to carefully align incentives when forming the relationship.

Where do the venture capitalists come into the picture? If things were going fine with the startup, VCs probably wouldn’t need to come into the picture. After all, despite the popular belief that raising VC money is the objective (at least for ‘wantrepreneurs’), rather than a means, that’s hopefully not at all the case for serious entrepreneurs. A reader may wonder, “Why is it so, that fundraising is a means rather than an objective?” Raising venture money is a way to add fuel to a fire, in which investors’ cash and social networks are used to accelerate the growth of a vision. Said vision may or may not be built on a healthy business model. Raising money may be a critical skill, though fundraising efforts must run in parallel to the primary focus on building a great business.

A VC investment is a vote in the startup’s favor that its team’s vision, execution, and tech must grow fast to capture market share or to define an entirely new market. To use an overused analogy, a startup is like a rocket ship on earth, and VC support is akin to the booster rockets that give the rocket a fighting chance against gravity to successfully make its moonshot.

This article describes the systemic challenges faced by DuV founders who aspire to build billion-dollar tech companies serving clients in commercial and government realms. In the next post in this series, I describe suggested approaches for a DuV team to 1) evaluate whether it should seek venture funding and 2) learn how to do so. I also share a chart of supportive investment groups, which I refer to as the “VC+DuV Friend-o-meter”. █

LEARN ABOUT OUR MISSION INNOVATION PROGRAM