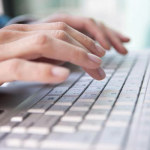 Parkinson’s disease is one of the most common neurodegenerative disorders, but its exact causes are still unknown. The disease takes decades to slowly but inexorably progress. As the disease advances, patients suffer increasingly motor symptoms, eventually experiencing severe disability and sometimes dementia in later stages.

Early signs of Parkinson’s can be so subtle they often go unnoticed, leaving the disease undiagnosed for years. While medications are available to help in the relief of symptoms, an earlier diagnosis might aid in the development of better treatments that could potentially stall the progression of the disease, for which no cure exists.

Using the information at our fingertips, a group of researchers from MIT devised an advanced computational algorithm to spot decline of motor function by looking at the way our fingers interact with smart devices. The software is designed to measure the timing of keystrokes, and provides typing data which researchers use to analyze the variation of each press and release to identify a pattern that can be used to evaluate and track subtle Parkinson’s signs.

While at MIT, the researchers worked on the project through their respective labs, Research Laboratory of Electronics and the Institute for Medical Engineering & Science, and utilized resources such as the Translational Fellows Program for postdoctoral associates, which offered access to mentorship and advising.

The team continues to work on the research for neuroQWERTY across MIT and beyond, and hope their technique can ultimately be used to create algorithms that can detect signs of other neurological or motor-based disorders and accelerate drug development.

As of 2017, the neuroQWERTY project has spawned different efforts: continued research at HM CINAC (Spain) and at the University of Texas at Houston. A new startup, nQ Medical, was formed to commercialize the technology created.

SCROLL TO THE DETAILED PATHWAY

Who are you?
or
View all opportunities